The Long and Winding Road to Publish Spike Diet X 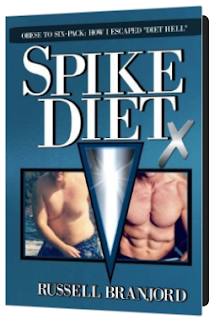 
It's been 10 years since I first published Spike Diet as an eBook hence the "X" in the title.  I thought SPIKE DIET X was cooler than "SPIKE DIET 10 years later" and I'm a nerd that likes Roman numerals.
My eBook was then picked by a local publishing company in 2008 and officially released as a paperback book in 2009. SPIKE DIET actually did okay despite its low production value and zero marketing dollars. It even showed up on the top 100 sales chart for weight loss books on Amazon a few times. While not huge, it was enough to get the publisher's attention.
In 2011 the same publisher approached me about writing a new book. He promised this one would be bigger and better and we’d have real PR and marketing. Of course, I said “yes!”

The plan was to release my new book in October of 2012; all I had to do was write my book and finish by the deadline, they’d take care of everything else.
I couldn’t hold back the excitement and I didn’t want to hold it back! So despite some worries that this was too good to be true. I went ahead and told everyone; friends, family, colleges, strangers walking by on the street.
By the spring I was done with my book and it was going on to a few months of editing and other behind the scenes stuff. The publisher put the manuscript into some review process and the initial reviews I read were very positive.
Then, as if I couldn’t be even more excited, the PR firm sent me my itinerary for a 12 city launch tour!  I had my future in my hands, quite literally. My future was going to begin at the Barnes & Noble on 5th Ave in New York and finish several weeks later in Los Angeles. Each city had network TV appearances and signings at their biggest bookstores.  At this point, I could hardly sleep and I was counting down the days.

Well, as I’m sure you could have guessed, that "amazing future" began crashing down.
I guess I am thankful that it crashed down before I was on the plane.

When summer hit, everything with this cooled down. I stopped getting calls and emails with updates. At first, I thought that we’re just at the point where we wait, so I did. Another week and more nothing. So I called the publisher and the phone just rang. I emailed him and days went by with no response. The PR firm called me and asked if I’d been able to get a hold of the publisher because they weren’t returning her calls either. I asked if I should be worried and she said, probably not, she’d make some calls to find the scoop for the both of us.
Well, there was no need to find it because the scoop found me. One of the publisher’s designers, whom I became friends with during the process, called me to say that he was just laid-off and I need to call the owner asap. I told him that I’d been trying for weeks with no luck. He gave me another number and said I should call as soon as we hang up. So, I immediately called the new secret number and he answered! I could tell that he was surprised it was me. He started by saying he was sorry, then proceeded to tell me that his company was in the process of filing bankruptcy. Everything we’d been working for; the tour, TV appearances and my book, they’re finished, he said, and he’s sorry but there’s nothing he could do. I wanted to be angry with him but I couldn’t. I could tell he was in tears as we spoke and I realized that his dream came crashing down with mine. I didn’t know what to say, I was heartbroken and on the verge of a panic attack. After the initial shock wore off, a feeling of loss and embarrassment took over. I didn’t want to give up yet because I couldn’t face it. So I became desperate! Willing to do anything, even sell my soul if it came to it.
I thought if I found a new publisher or new investor quickly we could still follow the current plan and make it all happen!

The dream was still alive!


Then I got a call back from a publisher and he seemed interested. He quickly lost interest when he asked me if I had a signed letter granting the rights of the book back to me. The bankrupt publisher still owned the rights to my book.


I didn’t get the legal rights back until the following year and by then it was too late. The momentum and hype were completely dead. I didn’t have any options in front of me and I was too hurt to try it all over again.
So honestly, I didn’t even care that I got the rights back. I didn’t care because quite frankly, I quit!

I gave up on this ridiculous dream!   Who did I think I was anyway?


I felt stupid for even hoping that something that amazing would happen to me. It was about time I faced the truth. I was born to live an ordinary life and there’s nothing wrong with that.
Now, almost 5 years later I realized the sad irony of the situation. I gave up on this dream as I gave up on my dream to lose weight.  I wasn’t born to live an ordinary life just as I wasn’t born to be fat. I naively chose these lives.

I refuse to quit!  No matter how long it takes.


I’m not used being so worried about being made fun of. I totally wimped out. I’m sorry. I used to say that my skin was as thick as the body-fat beneath it. I can thank the bullies for that after years of desensitization. Well, I guess with the weight gone I lost my immunity for a while.
The truth is, I know releasing this book, not professionally edited and without a publisher and their “final touches”, I am opening myself up to ridicule for errors. But I also know I can’t afford a professional editor or afford more time. If I use that excuse I’d just sit on this book for another 5 years. So be warned, this book will have grammatical mistakes.  I also tend to ramble and I’m pretty sure I rambled a few too many times in this book. Yet, I’m not waiting for another proof-reader so go ahead and call me “The Rambler”, it's okay.

Yeah, some may snicker and talk behind my back because they think I’m either crazy or an idiot or possibly even a crazy idiot, to believe that my book could actually make a difference. I’m willing to take that risk.
I also know I will once again be able to read my name next to the word “broscience” on message boards. Look don't get me wrong, I love fitness groups and forums. Most of the time they are extremely helpful and motivating. But sometimes the dieting message boards can become a bit brutal! The truth is, when people disagree they tend to get angry, but when they disagree over diets they can get downright nasty. I think we are loyal to our diets like we are to our sports teams. So don’t you dare say your team is better than mine! If you’ve been on them, you know what I’m talking about. Now I’m rambling again.

Anyway, I don’t care what the “hangry” people say anymore. I’ll happily be someone’s “broscience fool” if I’m another’s inspiration. The truth is, even if my book only helps one person transform their life, then I can say that any ridicule today and from my childhood was worth it. That was my purpose and what I forgot when I was so focused on 5th Ave New York.

I am very excited to finally hand over the book I wrote for you 5 years ago.

Peanut Butter Cup Pie That is Delicious and Healthy 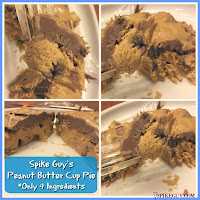 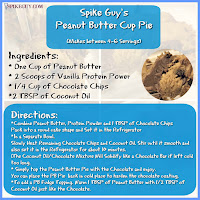 Directions:
*Combine Peanut Butter, Protein Powder and 1 TBSP of Chocolate Chips
Pack into a round cake shape and Set it in the Refrigerator
*In a Separate Bowl, Slowly Heat Remaining Chocolate Chips and Coconut Oil. Stir until it smooth and also set it in the Refrigerator for about 10 minutes.
(The Coconut Oil/Chocolate Mixture Will Solidify like a Chocolate Bar if left cold too long.
* Simply top the Peanut Butter Pie with the Chocolate and enjoy.
You can place the PB Pie  back in cold place to harden the chocolate coating.


*To add a PB Fudge Topping. Warm 1 TBSP of Peanut Butter with 1/2 TBSP of Coconut Oil just like the Chocolate.
Posted by Unknown at 11:35 AM No comments: